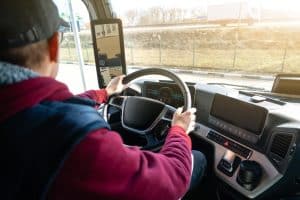 Of all the pieces of technology designed to make driving safer, the backup camera might be the “best” one. Not only does it help drivers maneuver in tight spaces, but it keeps other people safe, too. And unlike tech such as lane assist, backup cameras aren’t always running; they only come on when you’re in reverse. If they had the same types of cameras for big trucks, how much more confident would you be driving behind them? Fortunately, you may not have to wait much longer for that to happen.

Even though backup cameras have been installed on every newly manufactured car in the United States since 2018, they’re still not mandatory on commercial trucks. Later this year, however, Phillips Industries plans to introduce a new backup camera that can be installed on tractor trailers. The camera will come with a mobile app for drivers. In addition to the app, Phillips is creating a software development kit to providers at no cost.

Another company that’s offering wireless camera options is Driver Safety Technology (DST). They are working on a wireless option that addresses the tractor and trailer ownership problem while being cost effective. DST’s wireless camera setup will not include a host monitor or additional parts to set the camera up to the cab.

Past problems with wireless backup cameras

It’s taken a long time to figure out how wireless backup cameras would work on trucks, for several reasons. The main issues that were holding the installations back were connectivity and placement problems. Because tractors and trailers typically have different owners, it was difficult to keep the camera connected as the parts become separated as cargo is picked up and dropped off.

Another issue was the potential placement of the camera. If the camera was positioned a certain way, it could be damaged while the truck was backing into a dock.

Signal reliability was another huge issue to consider. Depending on the distance between the truck and trailer, it can be hard for an entire camera to remain connected. Truckers who drive 53-foot trailers are particularly concerned that there will be lagging issues based on the distance. One of the corporate research and development directors at Phillips Industries said that so far, there hasn’t been a wireless camera that reliably works on a 53-foot trailer yet.

The company has offered one solution that could help. Per CCJ Digital: “There are some chip sets that have come out in the last two or three years that have additional power capability in a much thinner broadband spectrum that Phillips will use to more reliably transmit a signal from the camera to the cab of the tractor.”

Getting the trailer owners’ support

One issue that both companies are facing is how to get the trailer owners on board with their cameras. While the truckers certainly see the benefits of the cameras, it’s harder for trailer owners who are only concerned about who will pay if the camera is damaged. The representative for Phillips Industries believes that drivers and their insurance companies will be responsible for any damage to the trailer and the camera. However, this is one of the benefits of using the technology: “The Phillips camera can record and capture images when triggered by a large bump that could damage the trailer.”

The benefits of wireless backup cameras for trucks

One of the biggest advantages of this wireless backup camera technology is accessibility. Before, there were only wired camera options available for heavy duty trucks. With the software development kit, truckers will be able to connect the camera with different devices through Wi-Fi or Bluetooth access.

This connection can also reduce communication issues between truckers and device providers. Instead of constantly communicating and keeping tabs on truckers, the easy camera access will alert the providers on what the truckers are doing.

One of the greatest benefits of wireless backup cameras is the potential reduction of truck accidents. Trucks are one of the most dangerous vehicles to drive next to because of their large blind spots. It has always been hard for truckers to see exactly who is driving behind or next to them. Wireless cameras are like that extra set of eyes for truckers around and behind their vehicles.

Take, for example, the back-up accident. One of the main causes of trucking accidents involving backing up is because of poor visibility. When truckers are backing up on loading docks, it’s hard to stay aware of all of the sudden movements. It’s very common for truckers to run over cargo loaders in the process. Safety features like the wireless cameras can make the presence of cargo loaders or pedestrians more accessible.

A final note about liability when it comes to truck accidents

While we believe working backup cameras will prove to be a real boon for drivers (and those with whom they share the road), we do recognize that relying on technology can be dangerous, too. In June, the New York Times reported that “nearly 400 crashes in the United States in 10 months involved cars using advanced driver-assistance technologies,” according to data from the National Highway Traffic Safety Administration. While a backup camera is hardly the same as Tesla’s Autopilot feature (or other autonomous features), we have some concerns regarding liability.

Right now, if a truck’s brakes fail, the trucking company may be liable, and/or the manufacturer of the brakes may be liable; it depends on what caused the failure and the specific events that led to a person’s injuries. Those same issues arise with tech, too. If the camera fails, is the trucking company solely liable? Would the camera manufacturer be partially at fault? Without the answer to these questions, truck accident claims will be even more complex, and that could end up hurting victims even more.

When you have been hurt in a truck accident, speak with an experienced Charlotte truck accident attorney today. At Price, Petho & Associates, we handle complex truck accident claims on a daily basis. We have the resources and knowledge available to help you get the compensation that you need. Call us at 704-372-2160, or complete our contact form today. We represent injured victims in Charlotte, Rutherfordton, and Rockingham.