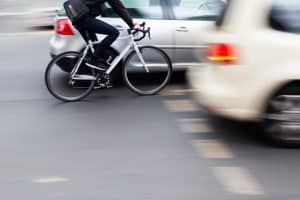 As the weather gets warmer, more people gravitate towards outdoor activities, like walking, running, and riding bikes. However, no matter what kind of activity is happening, people still need to exercise caution when they are near roads on which cars travel, whether those roads are busy or not.

The NHTSA dove deeper into the statistics and found that 71% of bicyclist fatalities happened in urban areas while 29% happened in rural areas. Because of these numbers, it is assumed that since the urban towns are more heavily populated, there are more cars on the road, which can lead to more traffic accidents.

However, the next leading cause was simply the bicyclist not being visible to the driver. Visibility is an important safety issue for cyclists. No matter how bright or reflective your clothing, drivers simply do not look for cyclists in the city or the suburbs. Drivers tend to make right turns without looking for cyclists. Drivers also tend to make left turns in front of oncoming cyclists without taking into consideration speed and distance.

Above all else, intersections are so dangerous and deadly for cyclists because there’s a lot of information being presented, and in most cases, only a short amount of time to digest it. Depending on the time of day, amount of traffic, and location of the intersection, cyclists are asked to:

Is time of day and year a factor?

While it seems like it would make sense that more bicyclist fatalities happen at night when riders are not as visible, this is not always the case. In fact, just over 50% of bicyclist fatalities happen in broad daylight. However, another study found that bicycle accidents which resulted in fatality did consistently occur during nighttime hours between the hours of 6pm and 9pm. While that timeframe did have the highest rate of fatalities, daylight accidents are likely higher because of the number of other bicyclists and car drivers on the road.

And while the numbers are slightly higher for fatalities in the summer months, the reality is that these accidents occur all year long. Fatalities are likely higher in bicyclists because they have significantly less protection than other motorists driving in cars. When a rider is hit, their body itself is hit versus the body of a car being hit in a car accident.

Not every accident involving a bicyclist is fatal, but sometimes accidents can lead to both major and minor injuries. Some of the most common injuries cyclists experience in accidents include:

How can intersections be safer for bicyclists?

At Price, Petho & Associates, we have dedicated bicycle accident lawyers ready to help you with your personal injury or wrongful death case. If a bicycle accident happened due to another person’s negligent actions, then our office of attorneys can help you make a strong case to obtain maximum compensation with the help of some other valuable information.

Make sure to gather as much evidence as possible. Take photographs of the damage to the car and bicycle, collect footage from any video surveillance cameras, obtain statements from any witnesses, and make a police report. Saving the bicycle itself would also help make your case strong enough to result in compensation from the at-fault driver’s insurance carrier.

If you or a loved one has been injured in a bicycle accident in or around the Charlotte area, reach out to the team at Price, Petho & Associates for help today. You could be entitled to compensation for your pain and suffering. Our attorneys have extensive experience handling vehicle accident claims throughout the state, and we have the resources and knowledge necessary to help recover the compensation you need. To schedule a free consultation, call 704-372-2160 or fill out our contact form today. Serving Charlotte, Rockingham, and Rutherfordton.